“6 died and more are dying in just the communty of Bayou Labatre” Trisha told us. 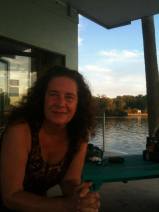 In this fourth part of our Gulf disaster expose we talk to Trisha Springstead, who is a health professional who has been gathering health data concerning the BP Gulf Oil disaster in 2010. She has been interviewed by Charles Wlliam Digges when he was investigating the health and environmental problems that were being reported.

In the early days of the disaster Trisha was shocked because of reports she was recieving from communities around the coast. The Charles Wlliam Digges article then caused peoples interest to come to Trisha with their stories and Trisha was able to get data that could be used for future reference (her FB community has some 27,000 people including victims). Her main concern was for the victims though and she holds talks to make people aware of toxicity poisoning and its symtoms so local communities can be enabled in dealing with this problem. As well as giving free legal and health advice.

Dahr Jamail also helped cover the environmental problems connected to the disaster for a while. 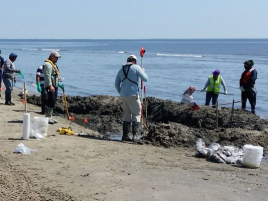 Trisha is involved in a new Documentary on the after effects of the BP Gulf oil disaster that is underway  but is seeking crowd sourced funding, to finish it. The Creator of this documentry is Mark Manning who also did the “Road to Fallujah”

The evidence that was ignored

Firstly, we should see what evidence has been brought forward to prove that there was a problem with toxicity within these communities. We should mention a report on Chemical Sensitivity that is peer reviewed that was sent to Washington DC to prove a range of symptoms caused by the disaster.

The peer reviewed report was developed by information from activists and Trisha helped with data from her findings. Trisha mentions in the interview that the final report submitted by Jena Soloman did not give the full picture of harm but did concede that harm existed. The link to the report is here;

Secondly, we should look at some of the symptoms found by Trisha and her colleagues.

“Brown drainage coming out of the ears”

In fact Trisha herself got ill getting sand samples from contaminated beeches and working in contaminated areas. She was followed by the police on one occasion, until she drove passed the state line. We discussed some of this harrasment with Charles Williams Digges and Maureen Duphinee in previous podcasts. Concerning Trishas illness, she said that one symptom, her skin rashes were awful;

“it itched so bad, you wanted to take the skin off”