Before I call everyones attention to the Ireland related Sellafield issues, I will just wade through this bit of excitement, but briefly. The last 3 posts on the blog documented some surveillance and blocking that seems to be occurring with blogs connected to Ireland. It seems some of the blocked links became unblocked (at around the same time) except for the Sellafield link (which has been re blogged in the UK without Google blocking it, So no harm done). I urge Irish blogs to check their headlines with Google search to find the full extent of the blocking. A reblog on the Sellafield post in Nuclear-news.net has had its Google search block lifted also (After nearly a month)

I have to commend the Gardai (I presume it was them) for their clear warning and sense of humor (you had to be there). It seems the original story is now starting to break and it looks like a call for reform (without any waste of time Inquiries I hope, The corporation/Governments best friend to “manage” bad news ). 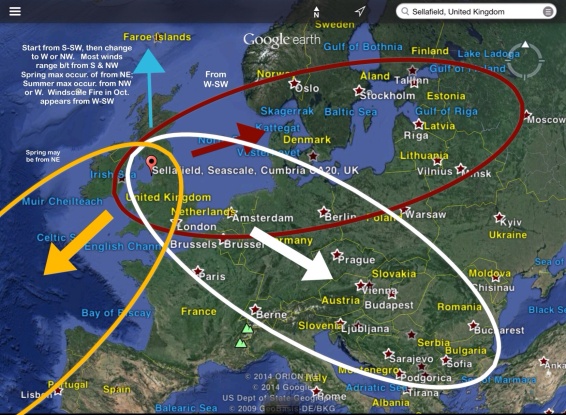 Image source; https://miningawareness.wordpress.com/2015/04/25/windscale-moorside-sellafield-accident-impact-fallout-map/ (NOTE the diagram shows the full extent of contamination but the really hot spot gets to some 150 Km from the plant easily hitting Ireland depending on the weather and winds.

The overt surveillance has now stopped, Phew! As they realised We were heading towards some less contentious (but not too much) storyline`s in the near future. With this in mind my rant against overt, Stasi like surveillance is done. Normal service will resume (and so will our Google hits I hope 🙂 ).

So we are waiting and hoping for a transparent and crime free future in Ireland and it looks like the ball is rolling on that issue (that might attract the Japanese etc  business fleeing the UK in search of a new European HQ – NOTE; they are leaving one of the most surveillance prone countries in the world where they can have no private communication , can Ireland offer them something like that? Iceland has plans for safe encryption and strong free speech laws, I hope we take a lesson from some of the ideas that are floating around).

Sellafield, the big radioactive fish in the room! 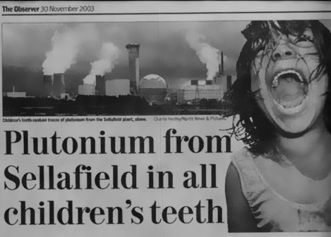 To finish, There is something really fishy about the Sellafield meetings in Ireland (Due in the next week approx). The Irish Government did not join other boundary/downwind countries around the UK in a recent ESPOO (Cross boundary contamination from nuclear sites) Convention statement in connection with the Hinkley nuclear power plant plans in the UK . Has the Irish government been lobbied by proven UK nuclear lobby “liars” and “Spin merchants”  (the Sellafield management and attendees of the UK Parliamentary Committee 2014)?

Friends of the Earth Ireland have written a damming critique of the use of the UK biased contamination Plume projections and respected nuclear expert John Large has stated that a radioactive plume could reach some 150 km (or more), thereby, destroying the good name Irish Agriculture has earned itself worldwide. Also, such an accident would destroy the lucrative Japanese market for clean Irish Seaweed (Post Fukushima).

In a recent spate of to and fro, between the nuclear lobbies experts and the Independent experts, it appears that the main spokesperson for radiation dose and health (Prof, Geraldine Thomas – currently touring Australia) has been slammed by Prof. Keith Baverstock (Ex World Health Organisation) in Fissionline #45, a few months ago and her Fukushima claims were debunked and the BBC reluctantly took the offending and embarrassing  video of her in the Fukushima exclusion zone in March 2016 down).

Also, The pro nuclear lobby are desperately trying to increase the allowable annual dose so as to mitigate the thousands of contaminated areas in many countries from excessive claims against health and environmental damage. From 1 mSv/y to an incredible 100mSv/y!! Watch this space!

The Irish government has all these facts as some were widely distributed in the media and others have already been mentioned by the stakeholders. Does Dublin deserve such a massive risk on its doorstep, some quarter of the population in the Republic at risk within hours?

Will the 1 million odd people in Dublin have access to Iodine supplements? The UK nuclear lobby would state that there is no risk!…. Just like the Japanese said before Fukushima  Some 300 odd billion Euros are being used in only the first phase of the so called clean up. Compensation claims to residents and business are pitiful in the most part and there is still 100,000 internally displaced refugees from the nuclear accident areas.

Be wary Ireland! There are wolves at the door! Say NO to Sellafield !! and share this with your friends (especially if they live on the East coast of Ireland or 100 Km inland from there) .

Regards, from the trenches, Shaun and Jimmy

Source evidence of Claim against the Ministry of Defence radiation health “expert” getting it terribly wrong here;

PDF for evidence (for download) can be found at the bottom of this article;

Link to the end of the Fissionline nuclear info website and nuclear expert Prof Geraldine Thomas`s OBE? #RIP and #RIPA

7 thoughts on “And now for the next chapter! Ireland and Sellafield!”